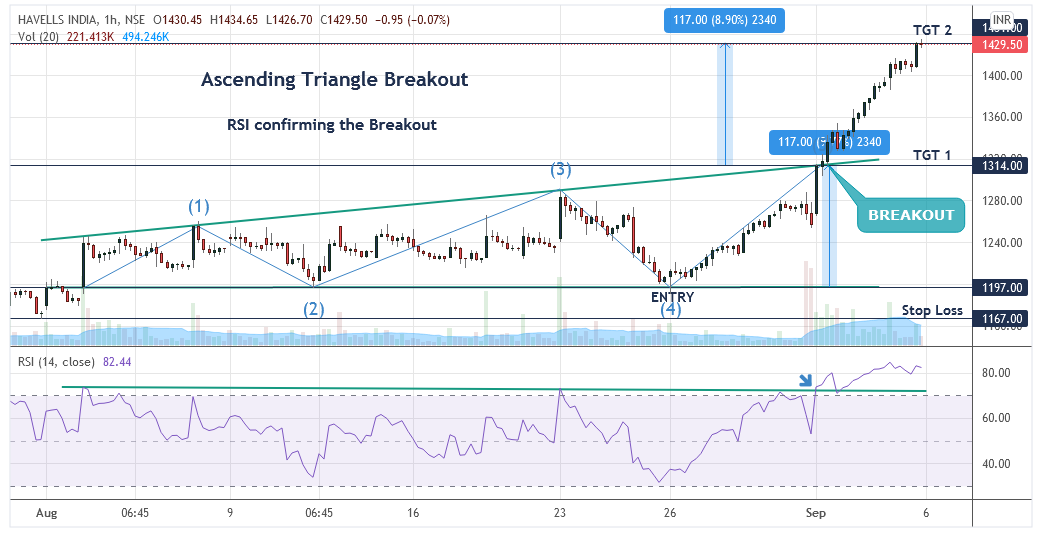 Trade matured unexpectedly fast and took only 7 days to complete giving an excellent return in very short time thus allowing to use the proceeds to be re-invested in another trade hence churning the capital.

Havells India had an ascending triangle breakout last week as the rally in equities gathered fresh momentum once 17,000 was conquered by Nifty. The stock being a FMCG was in itself one of the reasons for the rise as the sector is witnessing a strong bullish trend as the demand recovers along with its defensive nature in the index (which always supports the nifty if other sectors push the index in red). With index at all time highs and its going just one way up, FMCG tends to be the market favorite given that in a correction this sector will be neutral if not positive.

Havells had given an excellent entry when it successfully retested 1,200 confirming the ongoing ascending triangle pattern which later had a breakout and hence all the targets were achieved briskly. The entry though a risky one compared to a confirmed breakout entry did pay its dividend rather quickly as the stock rallied more than 200 points in a matter of 7 days and once the breakout happened the journey from 1,300 to 1,400s was super charged. RSI had given the confirmation of the breakout as well.

Leave your reply / Share your viewpoint in the comments section below.